This piece is from a writing class assignment. I wrote it in 2017- looking back on the winter of 2008.

Sundays were spent on the Redneck Riviera. Kids yelling over the motor, the dogs would jump in as we left the dock for the sandbar.

It could be tricky to get out- low tide for the sandbar and mid tide to get off the steep ramp. Chad had to time it just right.

Cooler. Life jackets. Shrimp net. Buckets. No chairs- we wouldn’t use them.

He taught the kids swimming with the currents, catching crab with hotdogs and string, and anchoring with the tide.

He grew up on boats moored at Catalina Island. Sailing was in his blood. But, he was on the wrong coast, working a very hard job.

After a full Sunday, he meticulously washed the boat while I fed the kids a hodge podge. Boat away, kids fed and bathed.

Addy and I sunk into the old loved loveseat. Thigh to thigh. She twirled my hair and laughed at her daddy, momentarily silly and childish.

(The loveseat was from a fancy store, downtown Santa Barbara. I proudly paid half. A month later, the furniture arrived. I didn’t have the money.

Chad, my intensely new soul mate, laughed kindly. He wrote a check and the loveseat was ours, the three of ours. Addy was in my belly.)

A knock at the door shook us from before bed rituals. A woman and a child in panic. The boys mom had thrown herself in the river.

911 and we trailed behind Chad. We couldn’t see a thing in the fog, not even Chad. I turned us right around as the kids started to cry.

I walked the kids back to the house over crushed oyster shells.

While I waited for Chad, ambulance, police and fire trucks drove past. Time slowed.

My chest was his pillow. In hushed tones, he replayed the surfacing of the dolphins, floating in detritus, and the stranger trying to die.

He paddled the canoe, searching for the fleeing woman through eerie fog. Her breathing was difficult to distinguish from the dolphins.

Face down, she resisted the rescue and life itself. He leaned out of the canoe, lifted her by her hair and fought the current to shore.

He fell asleep quickly like always. I breathed in the smell of his salty hair.

Warm, smooshed, and loved. I held him as long as I could to offer at least a tiny bit of the love and peace he gave me.

Foolishly idealistic, I didn’t know Chad was a rare gem when he paid for the loveseat or when we planned a baby 6 weeks into dating.

I see him now for who he is. He kisses. He cleans. He cooks. He works tirelessly. He takes care of all of us. I love him more than yesterday.

Chad’s job was researcher in youth suicide, a job no one wants.

When people asked, “What does your daddy do?” The kids shrugged and said “He helps people.”

He saved a stranger right in our River and told us about it over cinnamon toast. Now, his job made sense.

“Our Daddy is Superman.” 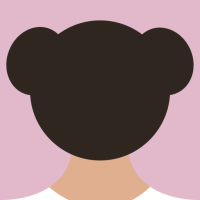 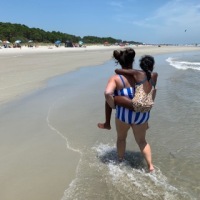