she had already made up her mind

she said something about needing to spend some time alone.

and I wondered out loud what it was she had to find but she had already made up her mind.

Lyle Lovett says it again. She’s already made up her mind.

I called my mom. I walked the alley that loops around the back of our dated brick condos. My safe place. Eroding dirt mountain of kudzu on one side and home on the other with small glowing squares of warmth and security rhythmically breaking up the terra cotta brick. I called my mom so it would be final. Over. I told her we were separating and that he had a long affair. I had been hit by a MacK TrucK. Every cell in my body hurt. I had been broken. I had been crushed. I would never be the same.

I had no sure footing. Naked. Untethered. Concrete underneath my feet. Telephone poles to lean on. The chain link fence holding back the weeds and wilted kudzu. The lights from the neighbors illuminating my tears. Shaky steps.

All I had was my decision to end the disrespect.

No way to go back. I called my two sisters, too and two cousins. I robotically told them the same thing. Separation. Long affair. In New York. I don’t know. Good bye.

I had called one cousin about 9 months earlier. I had sat in the grass watching George play soccer. It was just me watching alone which was unusual. When it was time for me to leave for the game, I couldn’t find my phone so I was doing a last minute panic in which I run around the house and shuffle small piles and fuss. We needed to leave. Chad gave me his phone so I could leave but still have a phone for the google maps to get me to some far away soccer field out in the burbs. We arrived as warm ups started and I watched George play his game. About half way thru the game, I got a text. Well, Chad’s phone got a text. Someone was breaking up with my husband. In the text, someone was telling my husband that it was over. And that she did not want to talk to him for a while until she got over him. Soccer sidelines. Itchy grass. Intense parents. My brain was hot. My face was hot.

What is happening? There wasn’t a name with the text. I started looking thru his texts and emails to find a name for this craziness. I couldn’t find anything helpful in texts. In emails, I found some evidence. Everything I found was from her. He must have deleted everything he wrote. I couldn’t see his replies. I could just find some remaining snippets in the deleted emails trash can.

Somehow I drove home. George sat next to me without knowing.

Chad convinced me. It took him about 3 days before I caved and decided he was telling the truth. She was crazy. He had never had sex with her. He had never dated her. He had her text me to say that she had accidentally texted her co worker- Chad and broken up with him, when she had intended to break up with someone else. She had texted the wrong number while drunk. She was so sorry for the misunderstanding.

Addy was about to graduate from high school. To get her to graduation had taken monumental hope. High school had been derailed by anorexia. Her teenage years had been obliterated by disease and recovery and relapse and hospitalizations met with starvations and great sorrow. And yet we were precariously and frightfully almost to graduation day. Grandparents were coming.

A trip was planned. A trip of a lifetime for our family. This would possibly be my last hurrah as a mom with an intact family- 6 kids and two parents in the big van driving from Atlanta to Maine. Three weeks of just us. The kids were ages 18-7. I had a lot riding on this road trip. I imagined the last time I could trap all 6 into spending time together in this way. Road trips are important to me. Seeing new things at every rolling turn. Swimming in small rectangular hotel pools with too much chlorine on our way to a vast ocean after just a few hundred more miles. I needed this trip.

I must have decided to believe Chad.

I wasn’t ready to face the dismantling of a family.

I didn’t know I could raise them as a single mom.

I sat with a friend who is our school counselor and she was impressed that Chad was making homemade tomato sauce for dinner that January night. She wondered aloud how he was so great. I was familiar with this question. He was an awesome dad an attentive husband. By outward appearances, he was a catch and the better half. I was convinced myself 85% of the time.

I told her about the break up text I had found months earlier.

I opened the box. I allowed myself to see the truth, by letting her in on our possible imperfection.

I looked in his phone as he was passed out on the couch. It took me a few minutes. He didn’t use her name but again in the hidden recesses of the email trash can, I found what I was scared I would find.

Talking to him wouldn’t work. He could talk me in circles. His charm could ooze and his large vocabulary could have me misconstruing and hyperbolizing and fucking nuts. He had done it less than a year earlier- the convincing me I was crazy and over reacting. How should I behave? Stare through him. Should I throw all his clothes out the window? No. I live on the first floor so it would be horribly unspectacular. Should I bash in his car? No his car was my car and we only had one. Should I go to work or hide in the bathtub? What do people do when their world is ending? Will I die? What do I wear to show I am not broken? I had no idea how to live in this new life.

I had never expected divorce.

I had never expected infidelity.

And then again, I had because there was the sock and the texts from the soccer game. How would I not be his fool this time?

I made up my mind. I called the people who loved me, even though I felt unloveable. And told them my embarrassingly shameful sad truth. My husband didn’t love me. He didn’t respect me. I had been a fool.

I walked by the telephone poles.

She had already made up her mind. 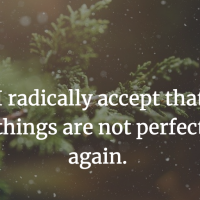 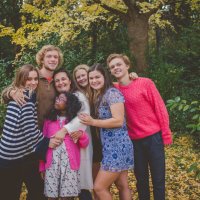 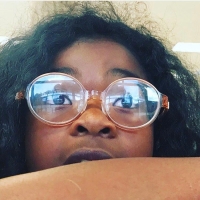 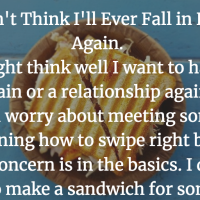 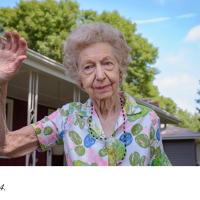